As home runs continue to increase, there have been more strikeouts in the MLB. Why are players hitting more home runs this year? 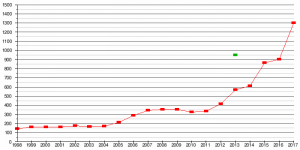 Are we going to see position players breaking the records of 1998 and 2001? At this point, many players are on pace to set a record this year.

In the first few months of play, we have seen an increase in home runs. Are baseball players moving closer to the plate? While there seems to be a smaller gap between the elbows and the plate, is this the reason players are hitting with more power?

Although we have seen the ball crushed in the past, this year’s home run derby received a lot of media attention. Because Aaron Judge hit 30 home runs prior to the All Star Break, many were excited to see him participate in the home run derby.

In addition, the home run derby brought a lot of newness with many rookies participating in the contest. Last year’s winner, Giancarlo Stanton had 61 home runs. Although Stanton didn’t repeat as champion, it was fun to see him swing the bat.

Judge was impressive in the finals of the home run derby. Furthermore, he hit eleven home runs with 2 minutes remaining. Indeed, this is impressive. As not only is Judge 25 years old, but he is a rookie.

Although baseball is a long season, we can expect to see a continuation of home runs. To sum up, many players are in better physical condition and are stronger than ever.