Make you sure check out Part 1 of this series for background information!

What are local anesthetics?

To refresh, soft-tissue injections interfere with the normal healing process in order to get an athlete to return to play sooner. With local anesthetics, there is disruption to axonal nerve conduction (7, 24). What this does is it allows immediate pain relief for an athlete. There are a variety of agents that can be used for local anesthesia. Agents, such as lidocaine and bupivacaine are among the most commonly used in practice (24) because they provide relief for a relatively long time and don’t frequently cause side effects and especially allergic reactions.

Some unwanted side effects are (4):

Local anesthetic injections can be used on their own or with corticosteroids (16). Importantly, because of the way they work, local anesthetics and corticosteroids are non-habit forming. There is no danger of getting addicted to these agents in the same way that someone gets addicted to opiates or alcohol. On the other hand, there can be undue reliance on these drugs that can have some serious unwanted effects on the athlete over the long term. When combining the two, there is a favorable combined effect of immediate local pain relief and longer-lasting therapeutic effect of the steroid agent (16).

A study, published in 2002, summed 221 local painkilling injections were used for game-day pain relief over a span of 6 years in Australian football (17). “An average of 10.7% of all team members took to the field with aid of a bupivacaine injection per game (17)”. The study also reported several major and minor complications resulting from injections.

Take a look at the image below to see areas of low risk (yellow) vs high risk (red) for soft-tissue injection complications. 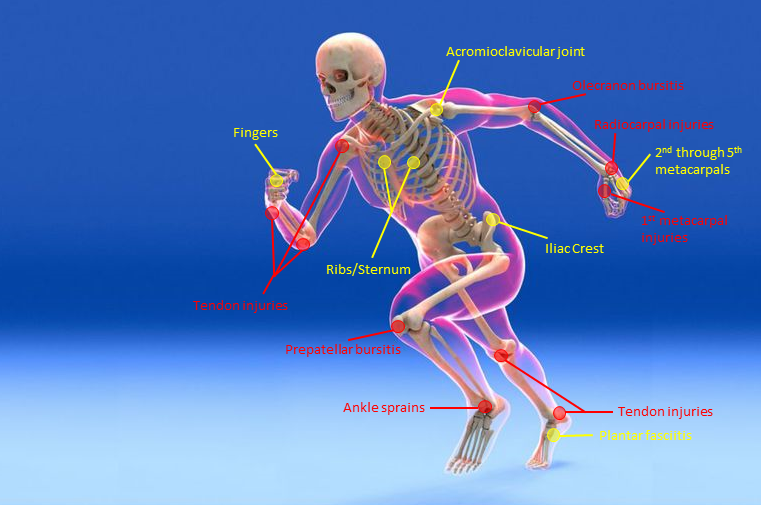 Subsequently, the International Rugby Board has banned painkilling injections. However, the NFL, National Collegiate Athletic Association (NCAA) and other organizations have left the decision to use injections up to the treating team physician (18). While the NCAA has a list of banned substances, pain killers are not listed. Though local anesthetics do have some restrictions.

In a 2015 interview, NCAA chief medical officer Dr. Brian Hainline stated a need to shift the mindset of pain killers in athletics. Hainline stated, “It’s too easy when an athlete is sore, to say well, why don’t you take this, you’ll feel better before the game…We have to do our part of that here at the NCAA.” Referring to NCAA’s intentions in establishing new guidelines and legislation for the use of painkillers by amateur athletes during competitions.

Non-steroidal anti-inflammatory drugs (NSAIDs) are some of the oldest and most widely prescribed drugs in medicine (16). NSAIDs have an anti-inflammatory effect. Two classifications you can use for NSAIDs are: acidic or non-acidic. Toradol is an acidic NSAID. One type of NSAID has not been reported to be more effective than the other (1, 14).

What makes Toradol unique in sports medicine, is it is the only NSAID available in an intramuscular or intravenous form. Intramuscular administration is the most common use as it can relieve pain within 10 minutes (20). That being said, Toradol has been demonstrated to significantly increase the risk of non-union after spinal fusion (10, 22), in addition to, the femur (9), tibia (3), clavicle (12) and acetabulum (2).

The effect of NSAIDs is very controversial for a variety of injuries:

Toradol is commonly used in the National Football League (20). It is believed to provide 50-75% pain relief for athletes from 1-2 days. A 2002 study (20) found 28 out of 30 teams used Toradol before competition, with players taking injections up to once a week during season. In addition to minor complications, athletes described a “psychological addiction” to taking Toradol injections for game-day (20).

In 2011, researchers sent out a survey to physician members of the American Orthopaedic Society for Sports Medicine, the Arthroscopy Association of North America, and the American Medical Society for Sports Medicine. The survey was meant to provide additional information over the use of Toradol as a treatment for athletes with musculoskeletal sports-related injuries. The survey reported nearly 49% of the respondents (respondents were directly involved in the care of athletes) used Toradol injections in the treatment of athletes.

A 2014 survey was sent to several NFL teams, 27 teams responded stating approximately 26.7 players (more than half of the active roster) per team took at least one dose of Toradol per game.

Without routine lab testing, athletes have suffered from renal complications due to Toradol use (20), which can lead to renal failure (8). Several athletes have experienced both minor and major complications due to to injections. Including Chris Kemoeatu, who was diagnosed with renal failure and claimed he was injected weekly with Toradol. Toradol is associated with decreased platelet function and increased bleeding time (6, 23). If you are in a contact sport, such as football, an increase in bleeding can be a great concern. Therefore, all athletes should be aware of what they allow done to their body.

How should I feel about injections as an athlete?

Toradol, corticosteroids, and local anesthetics should be carefully considered before use. It is important athletes have thorough discussions about the costs and benefits of the injection before competition, to allow the athlete to make an informed decision and not be influenced by the emotions of an impending game.

As always, it is all about awareness when it comes to making these vital decisions. If you’re an athlete, make sure you ask about what injections or other treatments you are receiving. Be aware of the frequency at which you use a treatment and know the risks.

Perhaps we should reorient our focus from how to quickly fix, to how to prevent soft-tissue injuries. Consequently, reducing the need of soft-tissue injections. With Sportavida testing, you can keep an eye on your soft tissue repair index, inflammation, muscle stress, and other important biological factors. This allows you to know beforehand if you are at greater risk for injury.

Thank you for reading! I hope you feel more informed and if you have any questions or comments, please drop a shout out.