Kinesio Tape: What Does the Science Say?

Kinesio tape was invented by Dr. Kenso Kase. It is an elastic therapeutic tape commonly used for athletic injuries, orthopedic, neuromuscular, and medical conditions (9). Kinesio tape gained wide popularity after the 2008 Beijing Olympics, where athletes were seen wearing the tape during the games (12). The tape itself can stretch 120-140% of its original length (3) and contract back to its original size (7, 8).

Kinesio tape is widely used in athletics as a tool to improve performance (9, 15). It has also been utilized to improve physical activity capacity in healthy adults (15). Research has suggested benefits of Kinesio tape include pain relief and support for muscle and joint injuries by lifting the skin and allowing increased blood and lymph flow (1, 4, 14, 15). This action supports the body’s natural healing process without restricting range of motion (16).

Most studies for Kinesio taping have focused on athletes and clinical patients (9) – investigating effect on athletic performance and rehabilitation therapy. A 2017 study decided to investigate the use of Kinesio tape on healthy adults. They investigated the effect of Kinesio tape on muscular power, strength, endurance, and self-perceived fatigue on the lower limbs.

Let’s Take A Look At Their Science

The study followed a randomized, cross-over, partial, double-blind design. This means subjects were assigned each trial in a random order – “cross-over” meaning there were multiple trials received by the subject. The double-blind procedure refers to both the subject and examiner (researcher) being unaware of which trial the subject belongs. To follow this procedure, subjects were required to wear an eye-mask during the taping process and cover the taped leg with an elastic knee band. (Taping was done by a single specialist, trained in KT therapy, who did not participate in later evaluations.) Researchers who conducted the performance measurements were unaware of which condition the subject was under due to the leg covering. Subjects were able to note the differences between NT and the other conditions (KT and PT) – hence, the partial double-blind. Because subjects could tell when they were undergoing the NT trial, even though they were wearing eye masks, there was a partial double-blind in the study design. (9)

Both I-shaped and Y-shaped Kinesio tapes were used for taping. Taping was done around the patella ligament and on the rectus femoris of the legs. If you take a look at the figure (Figure 1) below, you see an example of how the taping process was done. Subjects were instructed to lay down in a supine position on a floor mat. Hips were flexed at a 30° angle and knees were flexed at a 60° angle. (9) 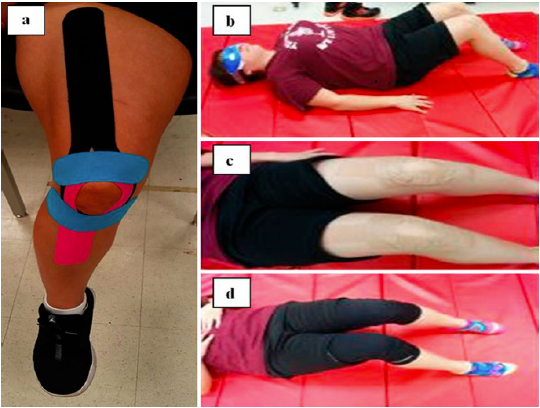 Muscular endurance was measured by the number of repetitions done in 60 seconds during a half-squat test. Subjects stood in front of a chair and squatted down until their hips touched the chair and knees were flexed at 90°, and then stood back up to starting position. (9)

Self-perceived fatigue was measured through subjects’ personal feelings towards the sensation of their lower extremity. Subjects scored the level of muscle fatigue felt on a scale of 1-10 using a Visual Analogue Scale (VAS). Scores were recorded before and after each trial. (9)

So, What Did They Find?

What Does This All Mean?

This study suggests Kinesio taping does not relieve self-perceived fatigue or aid physical performance in healthy adults (9). Previous studies have come to similar conclusions (5-7, 11, 13). For example, a 2012 study found no significant benefit on isokinetic knee function of healthy adults from KT application on the vastus medialis and knee (13). To add, a 2008 study also suggested KT probably does not improve muscle strength in healthy adults (7).

So, Does This Mean Kinesio Taping Is Not Beneficial?

While there are studies who have found no significant benefit, there are still several studies who have concluded the opposite. For example, a 2016 study assessed muscular power immediately after and 30 after KT application (10). They concluded muscular power significantly increased with KT application (10). A 2013 study investigated KT on pain relief in adults with knee pain (2). The study found KT was an effective treatment and effectively reduced knee pain in assessed subjects (2).

Where Do We Go From Here?

When we look at the science, the benefits of Kinesio taping can be unclear. This may be a factor of different methods and procedures used in different studies. Not all studies have used a double-blind design, such as the one reviewed here. If subjects or examiners are aware of Kinesio tape being used, there is potential for bias. Subjects may believe they feel improvement or work harder during physical activities because they believe the tape will help them to perform. Examiners may go into examination with a pre-existing bias for improvement in knowing Kinesio tape was used.

This study has limitations of its own. Kinesio tape has been used to help recover from injury or relieve pain. However, this study focused on healthy adults. Inclusion of people experiencing some degree of pain or injury may have altered the concluding results. Also, the type of tape application may not have been sufficient for the participating subjects. A different taping style may have been more beneficial for the participants and provided a different result. The study also had a short study period. A more long-term study of Kinesio tape application may give different conclusions.

It is important we consider all factors when using products to better our health or athletic performance. What is helpful for one person is not always helpful for another. So, make sure you are informed and monitor what your body tells you.

Thank you for reading! I hope you feel more informed. If you have any questions or comments, please feel free to leave a shout out!