Fatigue can be considered as a contributing factor for reduced coordination and response time in soccer athletes (8, 11, 13). Generally, the negative effects of fatigue are shown in athlete’s decline in muscle strength ability and shifts in coordination (8, 9, 14). These negative changes can impact an athlete’s kicking performance (5) and can be costly to both the individual and their team.

A 2012 study suggested athletes unconsciously use pacing strategies when they know the duration of an exercise intervention (4). This response mechanism may influence the results of a scientific study (4, 5). Pacing strategies are a way for an athlete to spread their energy out over time (aka “reserves” (12)) and not go over their limits (4, 5).

However, during a soccer game or training, the duration of intervention is not always known. Therefore, it is important to investigate the effect fatigue while taking into account:

A 2019 study, decided to do just that. They investigated the effect of fatigue and knowledge duration on kicking maximal ball velocity, and hitting accuracy. (5)

Let’s Take A Look At Their Science

A total of 24 semi-professional male soccer athletes participated in the experiment. Athletes were divided into 2 groups: knowledge of duration, and no knowledge of duration. Athletes in each group completed a 15 minute warm up and then began a carefully designed exercise protocol. Athletes were instructed to kick a soccer ball with maximum force and try to hit a target circle located 1 m high at the center of a goal. Each athlete was given 3 attempts. Immediately after the 3 attempts, athletes went through an exercise circuit. The circuit included explosive exercises such as jumping, skipping, sprint bursts, quick direction changes, driving the ball, passing, and some areas of slow running. After going through the circuit for 90 seconds, athletes attempted kicking the soccer ball again (3 times), and rested for 2 minutes. This process was done 5 times by each athlete. On the second day, groups switched and completed the same exercise protocol. (5)

So, What Did They Find?

This study found maximal ball velocity was significantly affected by the exercise fatigue protocol. Specifically, a significant decrease in maximal ball velocity was found after completion of the first circuit. After the first circuit, there were no longer any statistically significant differences (Figure 1). If we take a look at the figure (Figure 1) below, we see that while there is a general decline in both conditions, there is only a significant drop between “before” and “after circuit 1” (indicated by the *). (5) 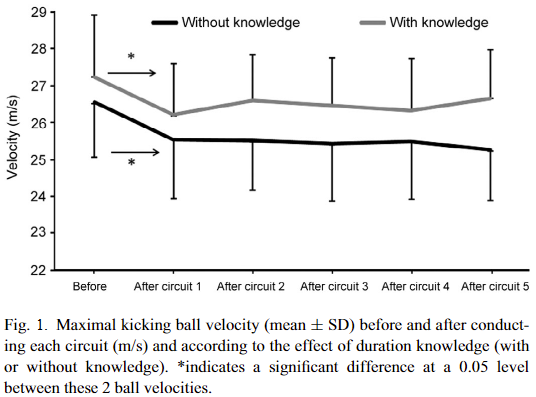 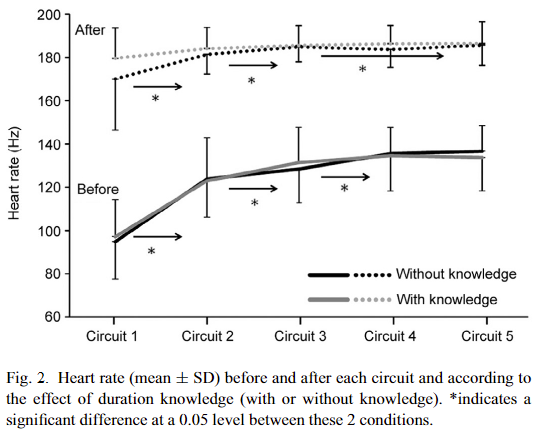 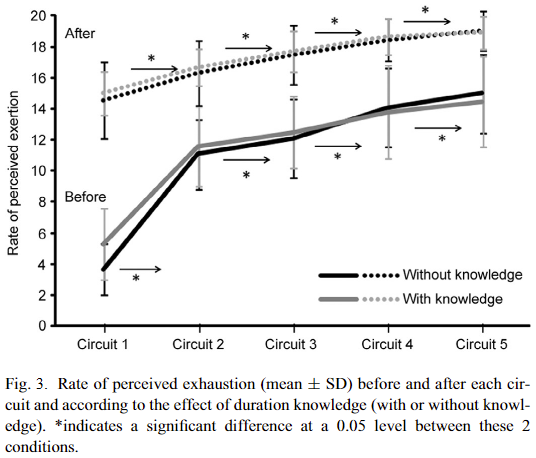 So, What Does This All Mean?

This study suggests kicking maximal ball velocity is significantly affected after an initial fatigue intervention.  This means soccer athletes may “adapt” to their exercise exertion to maintain some level of efficient performance (1, 4, 5, 10, 12). However, initially, they can be significantly fatigued by physical activity (5). Athletes, as well as coaches, should consider this when evaluating how to rest players.

Despite the increase in fatigue, this study did not find significant changes in accuracy (5). This is contradictory to other studies which demonstrate a reduction in coordination and muscle strength due to fatigue (6-8, 14). These findings could be a result of conditioning (5) or instruction (16). A 2014 study suggested kicking accuracy was solely affected when soccer athletes were instructed the main priority was to hit the target (16). In this study, athletes were instructed to hit the ball as hard as possible (5). This suggests accuracy is influenced by different factors as kicking, such as psychological factors (5).

This study suggests a possible learning curve, or pacing strategy, used by athletes – whether consciously or not (5). This could explain the significant decrease in ball velocity (Figure 1) only found after the first Circuit and then little change in the following Circuits (5). A 2012 study suggested athletes unconsciously set up a pacing strategy (4). While a 2011 study found, in anticipation for the expected number of efforts, athletes utilized pacing strategies during repeated-sprint exercise (1). In addition, a 2009 study demonstrated cyclists who knew the intervention distance in advance, established a type of “internal relative distance” used to set a pacing strategy (5, 10). The Millet’s flush model discusses the role of motivation and “security reserves” to better explain regulating fatigue (12). To sum, It is unclear the effects of fatigue and knowledge duration on exercise intervention. Therefore, caution is needed when considering effect of fatigue and knowledge duration (5).

What Can I Do As An Athlete?

Fatigue has negative effects but there are a multitude of strategies to help regulate and minimize its effects. Keep track of your performance and exercise routine. It is important for you to know what is going on in your “normal everyday”, as well as your “athletic everyday”. Monitoring your physical and mental health, in tandem with your athletic performances, can help you pinpoint how different factors influence your game.

Thank you for reading! I hope you feel more informed. If you have any questions or comments, please feel free to leave a shout out!